Book Review: Everything is F*cked by Mark Manson 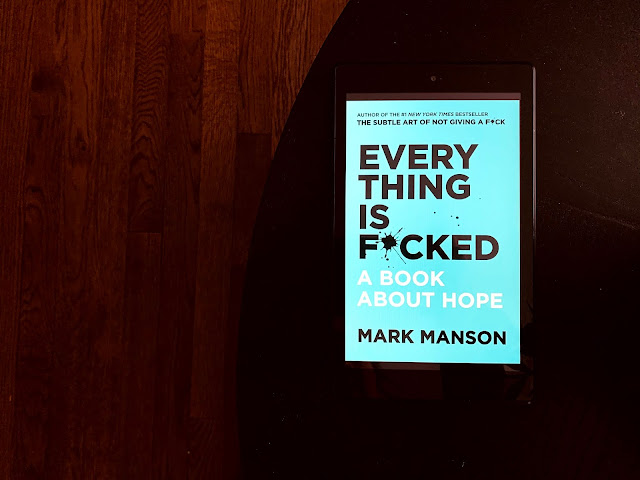 Everything is F*cked: A Book About Hope
by Mark Manson

So this book is a big fat lie.

It is not, in fact, a book about hope, and he even said it at the end of his book. That if you're looking to have some hope in your life, you won't find it in his book. What you need to do is be a better human being - a nebulous idea that rivals that of finding the fountain of youth. But heck, I have no idea why people pick up self help books in search of some divine knowledge. And in the hopes of changing our lives, we collect a bunch of info like some tourist at a rest stop on our journey to this thing called life. Well, I don't know what to tell you, except, only YOU can help yourself.

I guess, in a way, he was right. You have to find hope in you. No one can tell you how, but if you choose to listen to the negativity that surrounds you, then it's a sure fire way to keep you in the darkened recesses of your life. I don't know, maybe this book caught me on a day when I'm a bit more skeptical than usual, but it really didn't offer any good advice.

The problem I have with this book, is that there was no cohesiveness to his ideas. It reads like a bunch of essays that attempts to arrive at a destined location. Well, it was ineffective. It was a collection of philosophical musings that were often times funny, quirky, and has, surprisingly enough, merits. It was unfortunately, not enough to be helpful.

At the end of the day, he attempted to give us some pointers on how to become a version of ourselves that looked to have their shit together. And as I've mentioned above, easier said than done.

The oddest of times, I would absorb side info from the books that I'm reading. It would take me to something more interesting than what the book is actually about. In this instance, before he got to his point about the importance of meditation, he spoke about the Burning Monk from South Vietnam. If you're not familiar with him, he doused himself in gasoline and lit himself on fire in protest of the government. As his body was engulfed in flames, the monk did not make a sound nor moved. Manson attributed this to the monk being in a meditative state. He willed himself to not feel pain. This tidbit of historical info got me interested in reading a bit about the monk, more than I wanted to find more perspective in Manson's book.