Book Review: Clap When You Land by Elizabeth Acevedo 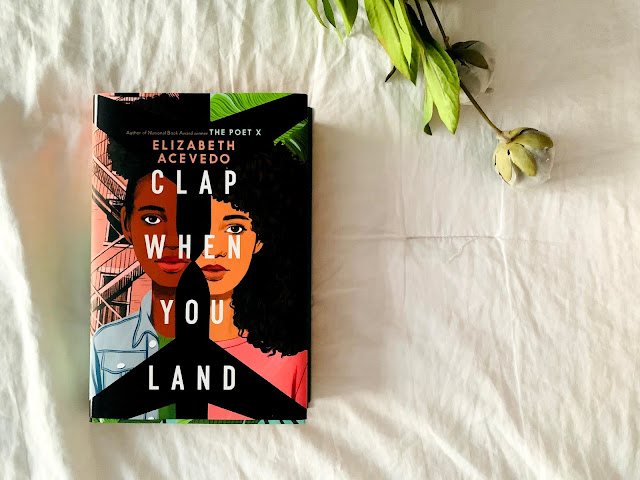 I've been a huge fan of Elizabeth's work since I read Poet X in 2019. After that, I followed it up with With The Fire On High, which, looking at my rating, I think is wrong. I rated it 4 stars, but I liked it more than Poet X. One of these days, I'm going to re-read that book so I can give it justice.

Clap When You Land is another book that's written-in-verse. I'm fast becoming a huge fan of this style. It's the minimalistic story telling that packs a wallop, because the narrator of the story reaches the readers in a more direct and impactful manner. Especially when a story is told in a first person narrative. In this case, we have a switching POV between two sisters, Camino and Yahaira. Though, they don't know of each others existence at first and only discovered each other when tragedy struck them both.

Every year, in June, Camino's father who lives in America stays with them for 3 months. This particular year, however, tragedy struck. The flight her father was on crashed, killing all passengers. Life as she knows it seems to be over. After all, without her father's support, her dreams of leaving the country and becoming a doctor crashed in the ocean with him. The only parent she's known and the only bloodline she's connected to was severed.

Every year, Yahaira's father leaves for the Dominican Republic for three months. It was always about business, and no amount of convincing him to stay home swayed him. This particular year, however, Yahaira and her father was barely speaking. She quit chess, to her father's chagrin. It was the thing that connects them; it's what they have in common. Besides that, she found out about his secret. One that diminishes the luster of adoration she used to have for her father. Before he left, she almost told him not to leave. It was a premonition she shouldn't have ignored.

Two sisters separated by an ocean, and their father's secret that connects them both.

I loved this story. I loved seeing Dominican Republic in all its beautiful, realistic glory. She depicted the country in a way that you see its people's struggles and how hopeless things can be for a lot of them. Camino's story isn't isolated. Without financial help, she will end up either working the tourism trade or worse.

I love how close she was to her father -- even if she only sees him three months out of the year. He was her protector, provider and her means to leave the country for a better life. I also love her relationship with her Tia, the only mother she's known, who would do anything for her. Yahaira's relationship with her father was complicated. She idolized him and did everything to make him happy. But when she found out about his secret, she was angry.

This story should've been about grief, for sure. But the book focused more on how the two will move on without their father, and how to deal with their changing lives. It's also about connecting two people who knew next to nothing about each other and establishing a relationship. For Camino, it's about trying to create a future outside of the country where life was becoming increasingly dangerous for her. For Yahaira, it's about reconciling with the fact that she has a sister from a place that eventually took her father forever.

Clap When You Land above all paints a hopeful story even through grief and loss. It's also about forgiveness for a father who was flawed in some ways but did his best to love and care for his daughters. In the end, I couldn't really fault him.