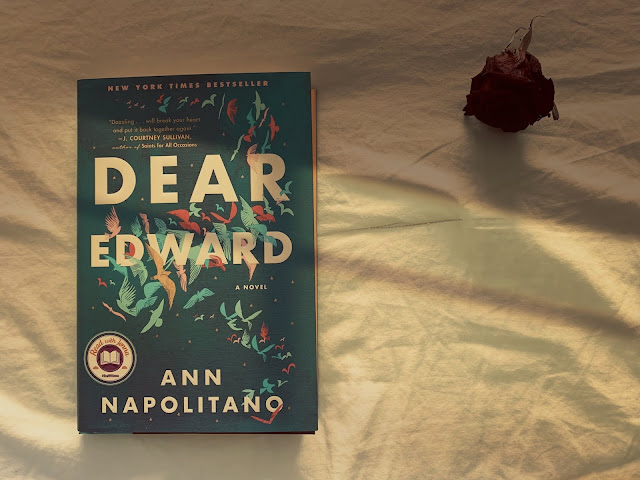 In 2010, a South African plane crashed killing all its passengers except for a 9-year old Dutch boy. Ann Napolitano obsessed about this story and was how she came up with this book. The result is a heart-rendering story about a boy who lost too much and lived all his life with that particular point of history riding on his shoulders.

Edward's family was moving to California from New York. Packed with all their belongings, they boarded a flight that they never knew wasn't going to reach its destination. The story moves in snippets of memories, showing Edward's life as a child and as a 12-year old boy. On the same flight, we see passengers and their own backgrounds: an injured Vet coming home, a pregnant girl on her way to see the father of her child who may not be ready for fatherhood, a millionaire with four ex wives, and the flight crew. In switching timelines, we see the story unfold between before and after the crash up the Edward's life as he grows up to be a man who learned to accept the loneliness, the hero-worship admirations thrown at him, and the kindness of strangers.

This is a gripping story in a way that a suspense novel has you in its grips. Funnily enough, it's not even suspense. The way it grabs a hold of you is how you're fully invested in Edward's story; how he copes with the death of his entire family, and whether or not the tragedy will ruin him. But because he ended up in the care of his loving and childless aunt and uncle, Edward turned out to be a well adjusted human being. He gets lonely for sure, but he was thankful, nonetheless. For the life he was given, for the sadness he could endure, and for the chance at happiness even through grief. Ann Napolitano's frank and understated prose showed us how to effectively relate a disaster story without being too explicit and yet make us feel all the sadness and the loss all the same.