Book Review: The House in the Cerulean Sea by TJ Klune 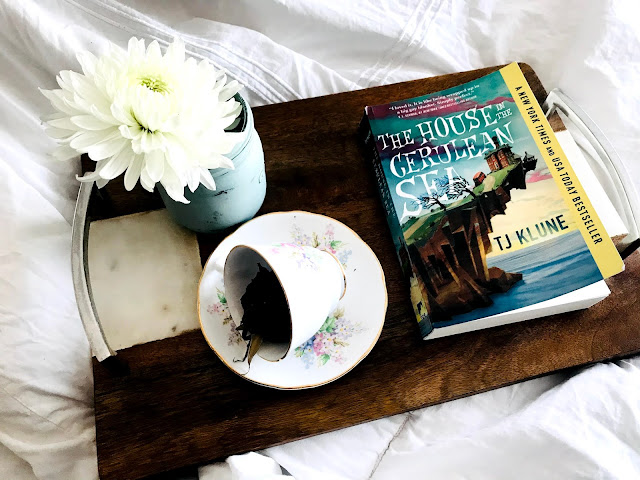 I didn't read Ransom Riggs' Miss Peregrine's House of Peculiar Children, but I did watch the movie. So if you're familiar with that, you will have an idea on what The House in the Cerulean Sea is about. But in my opinion, it's so much better. It's lovely, delightful, funny, sad at times, and it will teach you a thing or two about not judging people by how they look.

Linus Baker works for the Extremely Upper Management; an agency that handles the housing and care for kids with extraordinary abilities and characteristics. As far as case worker goes, Linus is one of the rare ones who genuinely cares for the kids. He tries to be as fair as he can, but sometimes, he can't help himself but be emphatic. He has a soft spot for the kids -- most of them outcasts of the society for how they look, some of them abused and abandoned by their own parents. Truthfully, some of them do not even know where they come from.

When he was task to make a month-long visit to a level 4 case, he was taken aback. Because it was a huge responsibility. Not only for the secrecy all it entails, but for what he may be in for. Especially when the first kid he's tasked to observe is literally the son of Satan himself. The kids in this particular orphanage are the sort that he's never encountered before: a living gnome, a young wyvern (a dragon-like creature who has a penchant for hoarding shiny things), a shape shifter who turns into a Pomeranian when he gets scared, a sprite who talks to nature, an unidentifiable green blob who wants to be a bellboy when he grows up, and as I mentioned, an Antichrist. But he also has to deal with the Master of the house, Arthur Parnassus and the cranky owner of the entire island, an adult sprite who was very territorial.

This book is definitely the perfect panacea if you're feeling maudlin --whether due to weather or the ongoing pandemic. An escape that can whisk you away to the blue, blue sea in the company of some magical children and the adults that love and care for them. The lesson it imparts is that of kindness and understanding and finding the simple joy in all things that we take for granted. And home, finding safety and harbour with the people who love us for all that we are. This also features love between two men who didn't think they would ever find love in their lifetime. Honestly, it's such a feel-good book. One of my favourite reads this year.