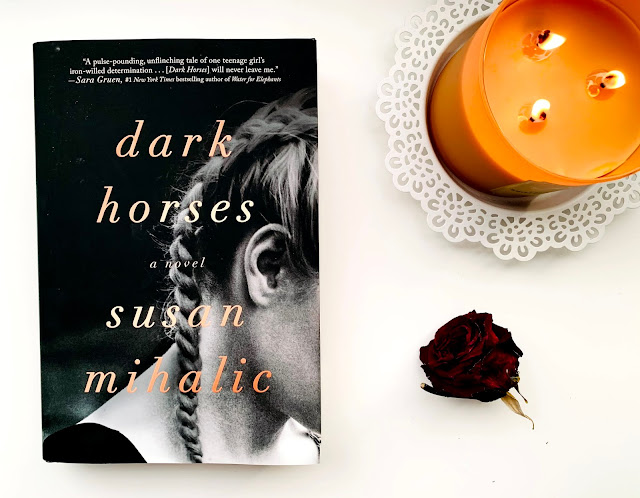 This book is one of my most anticipated reads this year. If you must know, I have a penchant for morbid reads. Not so much as horror but topics that typically make a normal person feel uncomfortable. In this case, Dark Horses deals with an incestuous relationship between a father and his daughter - among other things. And yet, regardless of the amount of time I've spent preparing myself for this read, the reality is, you can't really prepare for it. The descriptive scenarios in which Roan's situation made my skin crawl at times. Besides that, is Roan's state of mind, in which she finds herself kind of detached with the abuse and the twisted relationship she has with her father.

Roan Montgomery hails from a family of successful equestrians. She's driven, a hard worker, and disciplined. She's successful, and at a tender age of 15, she owes all her triumphs to her father. But behind the accolades and awards hide a sinister secret.

Over the years, Roan has learned to compartmentalize her father's role in her life: both personal and professional. After all, where would she be without her dad? Barely a chapter in, readers would learn that the relationship goes beyond familial. The abuse started when she was six years old and have been going on for years. Around her, people turn a blind eye to what's been happening. Her mother drowns herself in alcohol, while the rest of the household look after her concernedly while at the same time, not doing anything to help her get out of the abusive situation.

Needless to say, this book was incredibly hard to read. We see how Mont, Roan's dad manipulated her on a daily basis. And when Roan found a boy she could see herself with, he squeezed the vise harder on Roan. He groomed her into thinking that a life without her horses and success will be nothing; groomed her into thinking that without him as her coach and her father, she would have no career. When Roan fights back to gain control of her life, things got worse.

I enjoyed seeing Roan grow into a person and find her foot hold. Sometimes, her narrative is shocking especially at times when she gives in to her dad's demands. The way she mentally and emotionally accepts the abuse is something jarring. So you would have to be generous when you're reading Roan's story. In the end, her determination to escape was admirable and the means in which she went through it was fair. I absolutely enjoyed reading this frank tale of a young woman's journey as she escapes her abuser. It was difficult at times but offers hope that there is always an end.