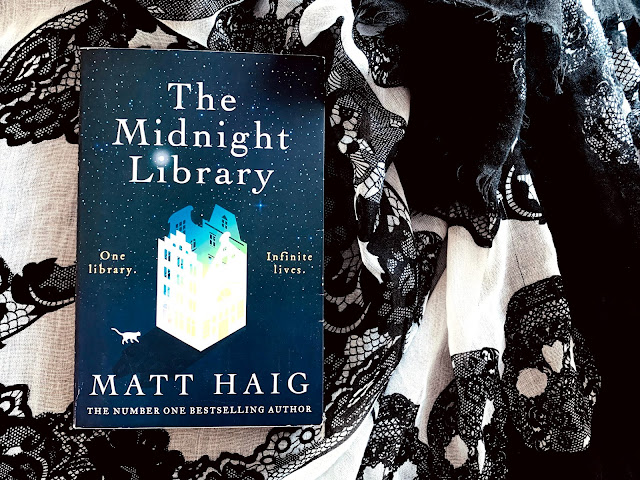 The story began with a woman decidedly wanting to end her life. But before she makes the most terrible choice of her life, we see how it was easy for her to arrive to her incredibly difficult decision. Her cat dying out in the street, her estrangement from her brother...her losing her job. She has no prospects and no future. She hasn't recovered from her father's death and everyday it's getting harder and harder to choose to stay in a world where no one would miss her presence.

So at midnight, she swallowed most of her pills and woke up in...a library.

The Library is not your usual library. It serves one patron at a time, and it houses books and books about your life. Your choices, your mistakes. In a way, it's a means for a person to see a life they'd not chosen while they were living. A second chance, if you will. Nora, however, was reluctant at first. After all, she chose to die and not to be reminded of what could've beens. The Librarian is a person she used to know in her past life. When she was a young child, she spent most of her life in the company of books and the library where her only friend was the librarian. Nora's young life and through her adulthood, she was to all intents and purposes, a loner. The author showed the kind of debilitating loneliness Nora suffered through all her life, when even her brother barely spoke with her. So when she ended her life, the choice was very easy for her, indeed.

If there's one thing I'd learned about this book, is that The Midnight Library does not exist, however much we wish we could have a do over for every stupid mistakes we've made. Life isn't about second chances, sometimes. So you take that leap and hope that the cliff is worth it and we could land on our own two feet without dying.

Matt Haig has a penchant for writing about mental illness and it's because he is a sufferer himself. He's a great proponent for mental health issues and uses his platform to talk about it. In here, we see Nora's dark days and depressive state. We see her make the most difficult choice because life made it easy for her to do so. Honestly? I was pretty weepy as I was reading how incredibly alone she felt. And that while the world was revolving, she's stuck with no end in sight. I could not fault her for thinking what else is there to live for?

The Midnight Library is an incredibly important story. It's a wrinkle-free plot line where the only conflict is wondering which 'book of life' Nora was choosing. It imparts a lesson in kindness for people who suffers daily and are very adept in hiding all their hurts and feelings of loneliness.