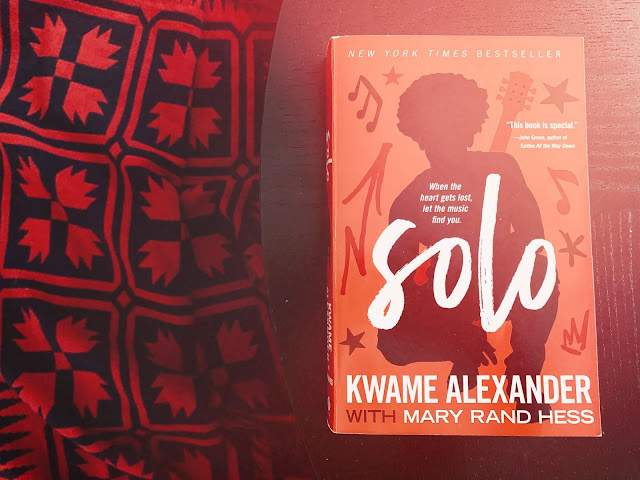 Solo is a written-in-verse novel about the price of being a celebrity through no fault of your own. Blade Morrison grew up in the shadow of his rock star father. The long reaches of his celebrity status that enable him to live comfortably and all the toys money can buy doesn't shield him from his father's long descent to infamy, however. Several stints in rehab, numerous publicity faux pas, and a career that's long faded into the background turn Blade's life into something he was embarrassed about.

When he found out he was adopted, he decided to search for his biological mother, as well as a means to escape the tumult that was his life in Los Angeles. In Ghana, life is as different as night and day from the life he's ever known in California. Living in a hut...motherless children everywhere...it's the simple life redefined. But in Ghana, he will find himself, and address the anger he continues to feel for his father, the loss that the feels for a mother that he lost, and attempts to question the biological mother that gave him up.

This was such a lovely, lovely read. I absolutely love Mr. Alexander's words and how he described Ghana. I also felt all the emotions he effectively conveyed as Blade struggled with coming to terms with his anger and sense of being wayward, being unmoored in a life where he lacked for nothing. His father, though, helplessly addicted to alcohol and drugs, did his best for his kids. His heart was in the right place, but he can't seem do anything right. His approach to fatherhood was always about buying his kids things, and making a fool of himself. I felt sorry for him, because he truly was trying. It's just he's going about it the wrong way.  Parents don't always know how to love their kids. All we can do is do our best.

In Ghana, he also found friendships and a kinship with an orphan girl who took a shining to him. It's one of the most beautiful friendship I've ever read before. A little girl grew such an attachment to him, you'd think they were related. Oh, but how sadly it ended. He also met a girl his age whom for a while, made him forget that his own girlfriend back in California betrayed him. A girl who understood him like nobody can, and one who never wanted anything from him unlike all the other people that's come and gone in his life.

Solo is an intimate portrayal of Blade's heartaches. Through Kwame Alexander's words, he shows us what it's like to feel loss in your own home and to find another place you can belong to even if it's miles away from the life you've ever known. Kwame's words are lovely, intricate, and honest. I read  it in one sitting but have left a lasting impression.