Book Review: Keeper of the Lost Cities by Shannon Messenger 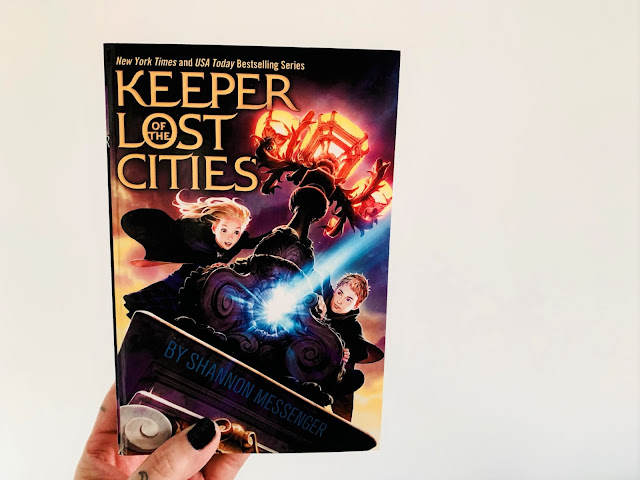 I hardly indulge in Middle Grade books, but I've been curious about this series because I follow a couple on BookTubers who swear by it. This series features elves, magic, dwarves, ogres, unicorns, and every little things that make a fantasy novel, a fantasy. But of course in a level that a newb like me could easily digest. Y'all know I don't do fantasy novels all that often, but I must admit that I'm slowly dipping my feet in shallow waters.

In here, we're introduced to 12-year old Sophie who struggles day in and day out with the incessant murmurings she hears in her head. You see, she's a human but also a telepath. But she doesn't understand why she's able to hear thoughts from every conceivable human within radius. One day, on a field trip, she meets a boy who would explain why she has this ability. It turns out, she's a dwarf. She belongs in a world unlike anything she could ever dream of. Fitz, the boy she met, also explained to her that life as she knew it must end. Otherwise, she's putting her family in grave danger. With great heartbreak and trepidation, Sophie agrees and leaves her family. Their memories erased, relocated to a place she will not be privy to know.

In the Lost City, she's assigned to a couple who would be her guardian for the time being. She also needs to learn the ins and outs of the world, the rules, how to make friends, and she must also learn to adjust to the knowledge that not only is she different and possibly the most powerful elf in the history of elves, but she's also a hybrid. A genetic anomaly created by an organization with whom the elves consider as enemies.

Sophie is a great character. She's kind and selfless, brave and strong. While she grapples with the new world she's becoming accustomed to, she's very open to ideas on how to navigate the world. Slowly, she learns under the tutelage of several elders. Her arrival to the Lost City isn't all fun and games, however. Some sees her as a threat to their world in general. And some sees her as a fraud considering she wasn't born an elf. She was created like a Science experiment -- a Science experiment who bears powers unlike anything they've seen.

Overall, I'm looking forward to watching Sophie grow and discover all her abilities. I also can't wait to read about all the adventures Sophie and her friends would get up to. Keeper of the Lost Cities is such a fun, escapist series. The books are averaging 550 pages each, but I can tell you that they're fast. I can dedicate a weekend to reading one book, tops. So if you're looking to get introduced to world and characters unlike anything you've ever read before, then you must try this series!