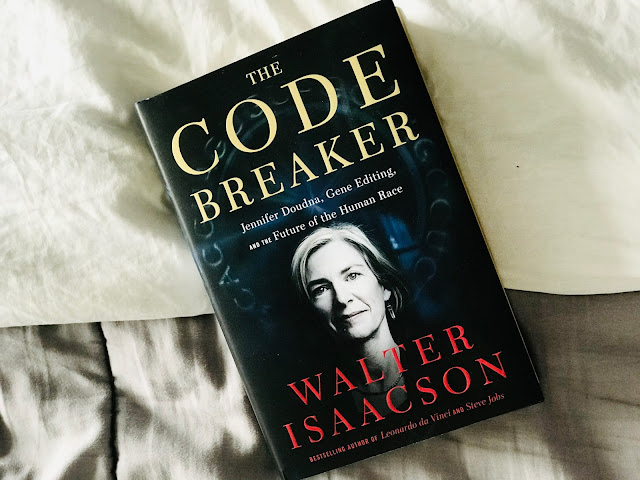 Walter Isaacson is truly the biographer's biographer. From Leonardo da Vinci, Albert Einstein, and Steve Jobs, his style of retelling someone else's story lends for some compelling and compulsively readable reads. There is something very timely about his latest, though. First, the subject is still alive. For another, it wasn't just another important person's life he wrote about. In light of the Coronavirus epidemic, this person's contribution to Science is astronomical.

What if Science could somehow figure out how to give instructions to a cell that could effectively destroy an invading virus? Imagine the possibilities! Cures for diseases and corrective therapies that could help babies with congenital diseases! On the other side of this discovery is that Scientists need to figure out how approach it ethically. After all, how easy would it be if the military to create "super soldiers" ala MCU's Winter Soldier? Or healthy human beings wanting to use it correct what they deem were  "imperfections" on their body? The foremost question in my mind, was do we allow ourselves such power to play gods?

The winners of the Nobel Prize in Chemistry were the subject of Isaacson's latest biography. Though mostly centred around American biochemist Jennifer Doudna. She, along with French Emannuelle Charpentiere already won a few awards in bio research. But it was only last year, when their discovery in 2012 won them the Nobel prize. Looking back in Nobel's history, this pair was the only the two women awarded since Marie Curie. So you can sense how important this already is. If you consider what they were able to accomplish, it's absolutely gigantic.

Let me try and explain it plainly (and it took me a couple of tries to figure out how this all Science shit works). CRISPR-Cas9 is a genetic code in our DNA that has the ability to go samurai on a virus' ass. They're like scissors that if inserted into a virus, severs the ability of said virus to wreak havoc. I never thought I could be interested in this shit, but man, I was hooked. As well, I didn't realize the field is full of drama. These folks are cutthroat. And because they are women, there were people who tried to discredit them and downplay their contributions throughout the years. Science is a massive field and it's very fluid and constantly evolving. The base discovery of these kick ass women paved the way for more advances in the genetics field. I guess you can consider them the mothers of CRISPR.  In their hands lay the future of the human race.

As for Isaacson, his fair and unbiased reporting lent for some great perspectives. The research on his part was telling. He attended numerous conferences on the subject; interviewed hoards of people well known in the field -- even Doudna's counterparts if only to get a sense of how competitive Science is.

I enjoyed this very much. It didn't have the dry characteristic of someone relaying someone else's life. I especially loved learning about how Scientists put their differences aside and worked for the common good in creating convenient Covid testing kits, and eventually, the mRNA vaccine. Listen, I know there are a lot of naysayers out there about the immediate discovery of the vaccine, but what they don't know is that how the biopharm labs out there don't really stop working. They have to learn how to anticipate future plagues and epidemic. And that's why Doudna and Charpentiere's contribution to genetics is even more important. They gave the world a fighting chance.