Book Review: Tender is the Flesh by Agustina Bazterrica 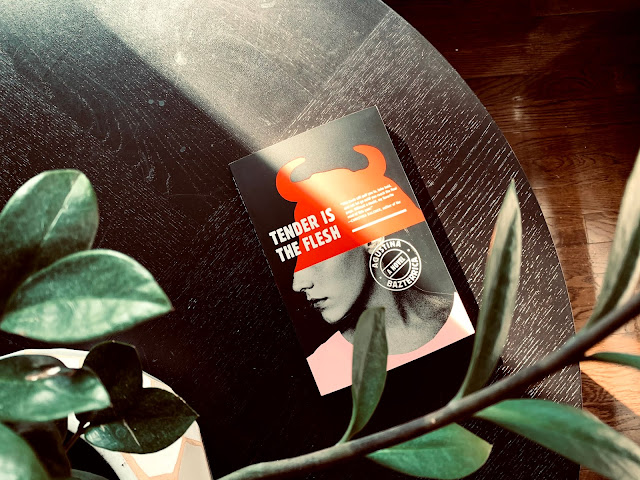 Permission to ask for you to suspend your disbelief for a moment. Imagine that we are now living in a world where animals have been purposely erased from existence. A virus that turned them feral and inedible swept the land that we had no choice but to kill every single one of them. (Never mind that the balance of the eco system actually depends on animals, but I didn't write this so...) We then turned to other people for meat and protein. (No idea why this world does not have plant based protein in existence, but here we are.) The government, wanting to curb murder and cannibalism, then made it legal to farm "humans for humans' consumption". This is the entire premise of this book and how we, as human beings will do just about anything to destroy what we have, bite off our nose to spite our face, and knowingly plunge ahead into our own moral demise.

Listen, it's not only because people were being butchered like cattle that churned my stomach. It's the  nightmarish account of how they're being farmed. Where their vocal chords were removed so no one can hear them squeal as they're being butchered. It's the fact that 'studs' were being milked for their semen to create more 'special meat'. It's how small children were killed because their meat is the tenderest -- as if they're veals. It's how pregnant women's abdomen were slammed against some sort of wood if the handlers deemed their babies not good enough. So yeah, let's just say this book goes beyond cannibalism.  It's also the coldness of each characters in this book as if they knew deep into their beings that there's no saving their souls from each atrocity they had a hand in.

The author was very gratuitous in showing exactly how the humans were slaughtered: clubbing them in the head, slitting their throat, draining them of their blood as they hang from hooks, and dehairing them in boiling water. This is the stuff of nightmares. Not even the sickest psychopaths could ever come close. What's worse is how the character, already slowly feeling the madness seep into his skin, managed to take advantage of a 'gift', impregnate her and well...you need to read how this gruesome novel ends.

If you're a carnivore when you start this novel, I can promise you that you will be a vegan when you turn the last page -- maybe even sooner than that. If you don't mind constantly having a pool of saliva in your mouth while you're reading this, and vomit rising in your throat, then this is your jam. As for me, you will probably not see me eat steak anytime soon.