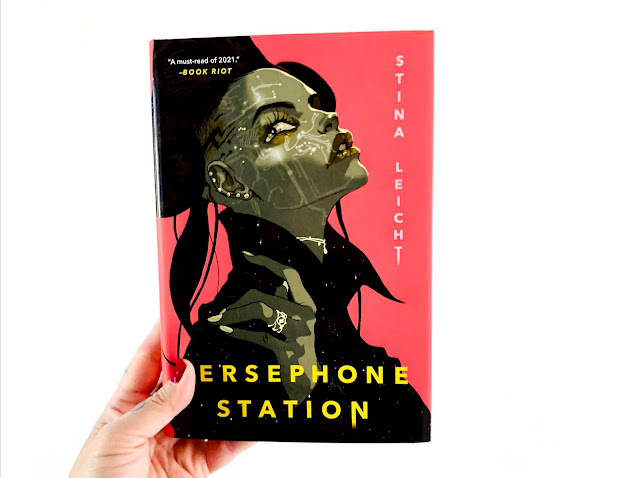 Right. I have very little experience with space operas of any kind. The last series I enjoyed was the Illuminae Files by the partnership of Amie Kaufmann and Jay Kristoff. I picked up this book because I wanted to expand my Scifi horizon. I was not disappointed. I was also not ready for this genre, but I persevered and got more for what I bargained for.

Persephone Station is a forgettable planet -- and the Serrao-Orlov Corporation would like it to stay that way. It holds a secret, a profitable one at that that they don't want the rest of the universe to know. If you survive in this planet whose weather is mostly always severe, you're probably golden.

Rosie, the owner of Monk's Bar holds knowledge and influence that could very well get them killed if exposed. So they try not to shake the status quo too much. Until they couldn't. Angel is an ex-marine whose circle of friends are much like herself, mercenaries.  The cast of characters are diverse: BIPOC, nonbinary, LGBTQ -- most of them are badass ex-soldiers with an axe to grind. But at its core, Rosie's former friend, now enemy will spearhead all the events that will happen in this novel.

About a century ago, Rosie and Vissa found themselves saving a group of alien life form called the Emissaries. As an exchange for their bravery, the bffs were given the gift of prolonged life. Rosie kept her promise. Rosie became a bar owner whose main goal was to help the Emissaries remain hidden from the universe. Vissa worked for a corporation who was exploiting the Emissaries secretly, until she decided to completely eliminate them from existence.

If it sounds a bit daunting, I can tell you right now, that it is. I can compare it to the first time I've ever set foot in Hawai'i. It was an assault to my senses. I couldn't make up my mind where to look first or experience. It was a lot to take in. But given the time, I was able to adjust. Much like my experience with this book. If you're like me, who rarely find herself in the pages of a Sci-Fi book, then it would take a while before  you'll be able to settle in. The world, as strange as it was, was jarringly beautiful. Rough, tough, and extreme much like the cast and crew of this novel. You have alien life forms, AIs, advanced technologies to sift through, and a life form that has her three sisters living inside herself. Also, ginormous animals that are difficult to describe.

I did enjoy my foray into this world, stark as it was from what I'm used to. The plot moved along with the the speed of every action sequence in this novel -- which there was a lot of. I also like the camaraderie and the connections between all our characters, banding together no matter the differences in personalities and identities. If anyone ever tell you that Sci-Fi characters are sterile and cold, they may be wrong to assume that in Persephone Station. Because this book is all heart and warm fuzzies after everything is said and done.